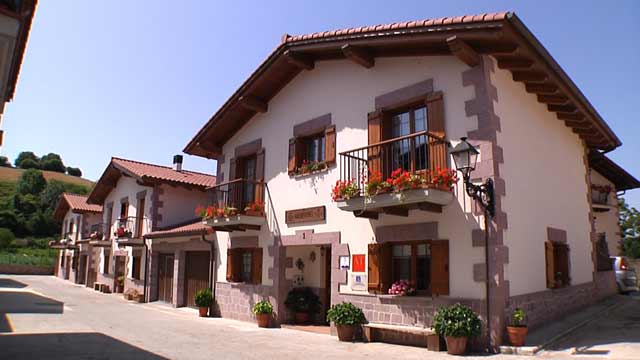 It is located in the urban core of Lantz (120 inhabitants), in front of owner´s living. The house is distributed in two floors; it has a garage and a garden with furniture. On the ground floor there is the living room with fireplace, TV, DVD, HI-FI, table games and library, the dining room, the independent perfectly equipped and a full bathroom. On the first floor there are two double bedrooms, a double (marriage) bedroom with bathroom and other shared bathroom.
Cared decoration. Availability of cot.

Lantz is located in the Valley of Anúe, 25 km from Pamplona, limiting on the North with Baztán and on the West with Ulzama, watered by the river Mediano and conceded streams. In the term there are some of the galleries of the karst cavities were exploited in Roman times to obtain mineral. The mining town would be in the same site of the present town, so it is estimated that the urban structure corresponds to a distinct type of settlement in Roman times. There are several houses of the XVII-XVIII centuries, some of them with armed blazon. And Lanz is known for its ritual of Tuesdays Carnival, which begins at noon peculiar procession parades through the streets to the sound of the txistularis, being remarkable some of its characters: Miel Otxin, Zaldiko, Ziripot. It is declared Cultural and Tourist Festival of Navarra. Or put another way: On the feet of Velate, in the Valley of Anúe. Atlantic Houses of good appearance, some blazoned of the from the XVII-XVIII centuries in the main street. Its rural carnival is Regional Touristic Party, worthy to be known. In front of Arraiz there is a dolmen. It keeps the rural and cattle environment of the mountain area.

- Data managed and maintained by the owner - Information provided by © RuralesData.com